I’ve learned the hard way that the manner in which Atlanta names things can make your head spin.

From KNOWAtlanta’s article “Atlanta by the Numbers,” I learned there are 71 streets in the city named “Peachtree.” Seventy-one! It’s an absurd amount, but it’s actually less confusing than you’d think.

The thing that has perplexed me the most so far since moving to Atlanta is the parks. The term park has been used liberally.

When you look at a big map of the city, there are patches of green everywhere. Some are bigger than others, some are really small but really popular, and others are just golf courses. This is the South, after all.

Then there are little lies spread throughout the map that say things like “College Park,” and then when you type the name “Inman Park” into your GPS with your picnic basket and Frisbee in tow, you get taken to a neighborhood instead of the beautiful expanse of grass you expected.

Luckily, I have made a mostly-accurate map of the real parks and “fake” parks in the city and my experiences with them. 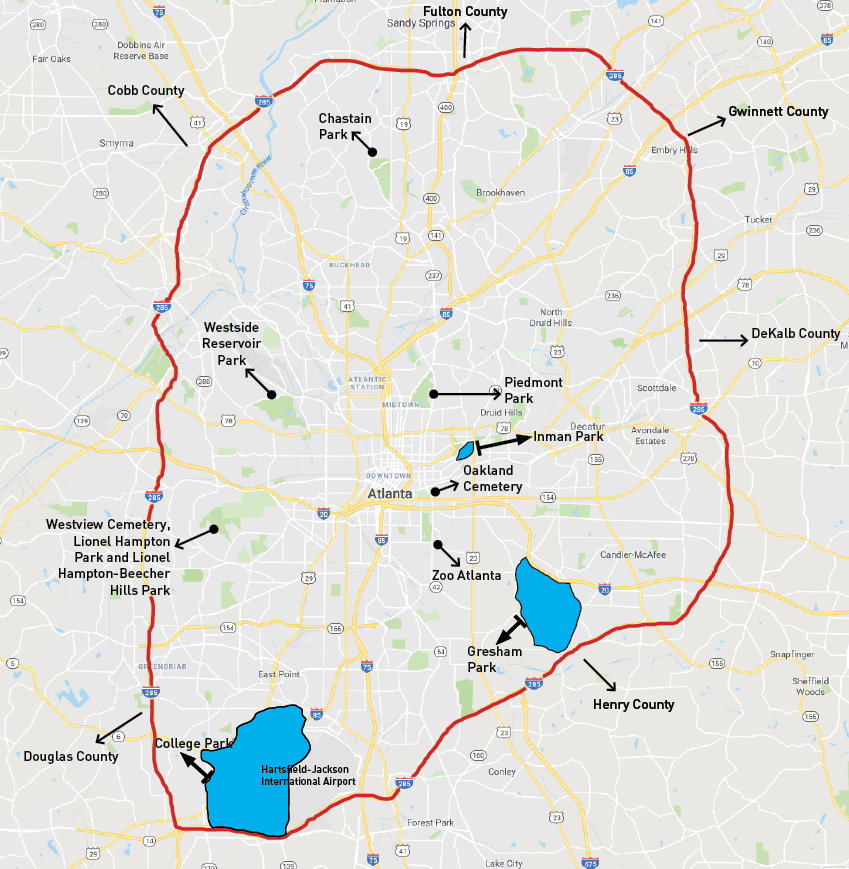 A mostly-accurate map of the parks and the so-called "parks" in Atlanta. The red line symbolizes the I-285 perimeter of the city while the blue blobs represent the "fake" parks, which actually are neighborhoods. Please note the College Park boundaries may be inaccurate, but drawing on a computer is hard.[/caption]

The coolest park, at least in my opinion. It’s in the heart of Midtown and is 189 acres of ponds, courts, sidewalks, and fields surrounded by the city’s skyscrapers. It’s one of KNOWAtlanta’s favorite photo spots and it’s easy to see why, especially at sunset. This park hosts some of Atlanta’s favorite events throughout the year, like Music Midtown, Atlanta Food and Wine Festival and the Atlanta Dogwood Festival. Piedmont Park is also attached to the Atlanta Botanical Garden, which is beautiful all year round and features the popular Garden Lights Holiday Nights event during the holidays. 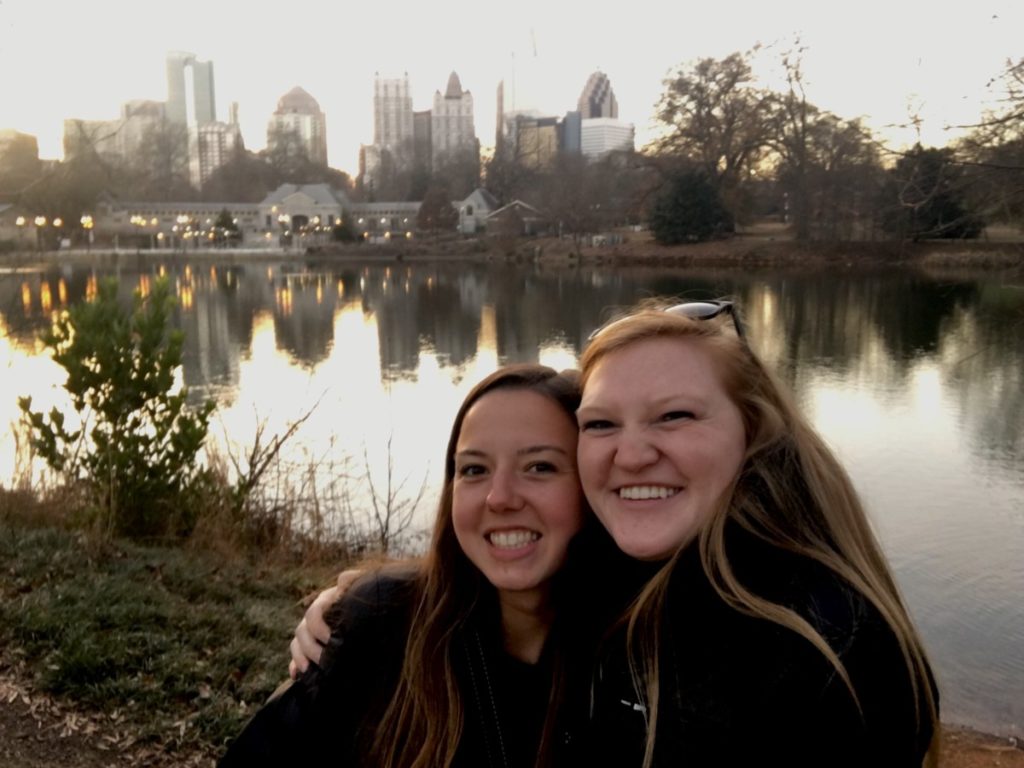 My friend Kate and I on a recent chilly day at Piedmont Park.[/caption]

This park is the northernmost of all the metro parks and is beautiful. The Chastain Park Amphitheatre has hosted artists such as John Legend, Ben Rector, O.A.R., Goo Goo Dolls, Backstreet Boys and more, though the Amphitheatre is undergoing renovations until the summer of 2018. Chastain Park also hosts the Chastain Park Arts Festival, where festivalgoers in northern Fulton County can browse art by local, regional and national artists.

This park isn’t actually finished yet, but it’ll be cool once it is: This location is an abandoned granite quarry that is being transformed into 2019’s Westside Reservoir Park. The quarry may look familiar: That’s because it’s been used as a filming location for "Stranger Things," "The Walking Dead" and "The Hunger Games: Mockingjay (Part 1)." The park will connect to the Atlanta Beltline (a giant collection of trails and parks that loops around the city) and will offer incredible views of the Atlanta skyline. Obviously, I’ve never been to this park, since it’s not open, but I’m stoked to see it when it’s completed.

Easily the biggest blob of green on the map inside I-285, but also the most confusing. I’ve never been to this park, so it’s hard for me to tell which part of this green blob marks the end of the cemetery and the beginning of the park. The 48-acre plot of land is shared by the Beecher Hills Nature Preserve, which is over 100 acres of trails and creeks as well as a historic battlefield, and is named after Lionel Hampton, a celebrated jazz musician.

The nearly-perfect square just below I-20 is the zoo, a classic city staple and an Atlanta can’t-miss. I personally haven’t been yet, because it’s been freezing cold for what feels like forever, but I’m very excited to drag The Boyfriend to it in the spring. Zoo Atlanta is one of four U.S. zoos where you can see giant pandas and the only zoo where you can see twin giant pandas. Super neat. Also, KNOWAtlanta told me I could meet the pandas... not sure the minimum age requirement on that though. 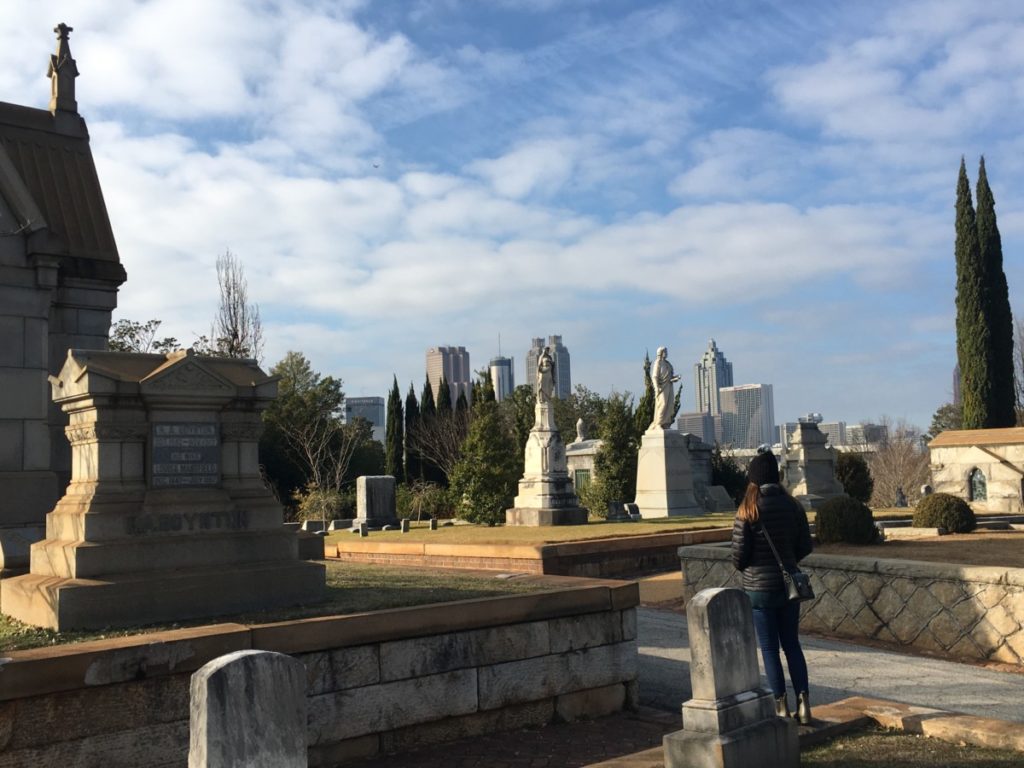 A friend looking at the city from historic Oakland Cemetery.[/caption]

You wouldn’t think an old cemetery would be cool, but it’s a secret haven that is located among downtown’s towering skyscrapers. A friend and I went recently and it was one of the coolest (and cheapest) things I’ve done in Atlanta so far: The cobblestone walkways and narrow pathways among centuries-old sculptures and familiar names like Maynard Jackson (Think: first African-American mayor of Atlanta, airport) and Margaret Mitchell (Think: Gone With the Wind) was a surreal experience.

If you’re looking for the hippest of the hip, go to Inman Park. This area of downtown was Atlanta’s first planned suburb and it has the architecture to prove it. I drove around the area just to look at the beautiful Victorian-style homes. The area is surrounded by the Atlanta Beltline and Little Five Points, a trendy shopping and dining district. I visited the old warehouse-turned-food hall, Krog Street Market, and was not disappointed (try out Jeni’s Splendid Ice Creams first, followed by actual food at Superica… 10/10).

This south Atlanta area is home to many Georgia State University students. I’ve never ventured this far into the city, but I’m sure it’s a great place, despite being named “Park” and not actually being a park.

I met a girl from here recently, and I was jealous at first that she got to live in a park. In reality, she just lived in an area of town that shares boundaries with Hartsfield-Jackson International Airport and has lots of MARTA stations and quaint restaurants in historic places. College Park is home to Woodward Academy, a lovely private school, ExpressJet Airlines, and Chick-fil-A, so it must be great. I know things about College Park because music legends like 2 Chainz and Ludacris are from here, as well as NFL quarterback Cam Newton.