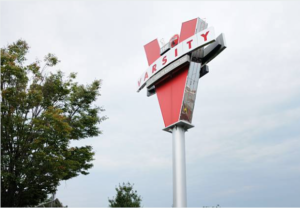 One of the first things I did in Atlanta was eat at The Varsity. As an employee shouted a friendly “What’ll ya have?” from behind the counter, I promptly ordered a $1.63 cheeseburger and grabbed one of the iconic paper hats off the counter. Known as the World’s Largest Drive-in Restaurant, the original Midtown location has been open in Atlanta since 1928. With several locations throughout metro Atlanta and in Athens, it's the perfect casual date night spot to share a frosted orange.

Afterward, his family and I made the trek to the north Georgia mountains. The trip was about an hour and a half leaving from their home in Marietta, but it was so worth it. We went up north to Dahlonega, a once-powerful gold mining town and now home to the University of North Georgia, to go canoeing along the Chestatee River. The views along the water were stunning, and the water wasn’t crowded with boats. The Boyfriend and I (well, mostly me) screamed our way through thrilling rapids and saw lots of turtles sunbathing on logs. Many Ninja Turtle jokes were made. 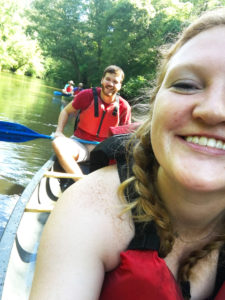 Selfie on the Chestatee with The Boyfriend and his parents.[/caption]

We finished up our exciting canoe trip and searched for lunch in Dahlonega, walking around the downtown area and dining at The Crimson Moon, where we ate the most delicious spinach and artichoke dip we’d ever had. There were tons of cute clothing, art, toy and sweet shops here, as well as street performers playing on the sidewalk. We left the town with hands full of ice cream, fudge and jams, and headed to finish up our day trip in Amicalola Falls State Park.

I didn’t know what to expect when I was told we’d be going here, but I certainly wasn’t disappointed. It’s the highest waterfall in Georgia at 729 feet tall, and the nearby trails lead to the starting point of the Appalachian Trail. 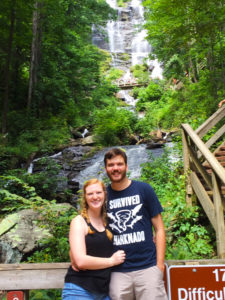 There's more waterfall where that came from, folks.[/caption]

It had been a long day, so after staring in awe at the waterfall and taking a few pictures, we headed back to Marietta. The Boyfriend and I fell asleep in the back of his parents’ car, but we woke up in and out to discuss how family-friendly this trip to north Georgia was.

KNOWAtlanta has a whole list of family-friendly day trips, one of which includes a tiger, and I can’t wait to try them all out. In the meantime, though, I’m planning out my future retirement in adorable Dahlonega and writing a letter to The Varsity advocating for expansion to my Alabama hometown.