Because I’m a Millennial, I rely heavily on my smartphone. I blindly followed my GPS into the city for the first time to meet The Boyfriend’s family at their home in an Atlanta suburb called Marietta, and once I got here I couldn’t even tell you which major interstates I had to use.

“Did you get a lot of traffic going on 285?” asked The Boyfriend’s mom.

Now I know. It’s an interstate that loops around the city that has 16 lanes and somehow still gets crowded before and after work hours. Also known infamously as “the perimeter.” 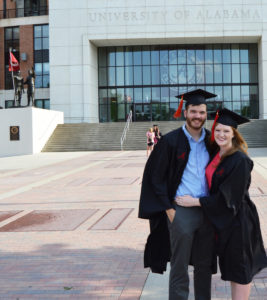 Just a couple of Bama grads trying to navigate the Peach City.[/caption]

Her question made me realize I knew very little about Atlanta. From the few friends I have in the area, all I really knew was that there was lots of shopping here, a very large airport, a few film studios and my aunt once told me there’s a place called Peachtree where everyone rides around on golf carts. Oh, and the Atlanta Braves.

Even though my boyfriend is from the metro Atlanta area, he didn't know much more than me. I guess being an Alabama football fan in a sea of Georgia Bulldogs isolated him. Or maybe it was because Marietta had everything he needed and he never had to go into the city.

Okay, place to live first, I told myself, flipping through the pages of KNOWAtlanta. Oh, there’s an art museum! Maybe The Boyfriend and I could – focus, find a place to live. I studied KNOWAtlanta’s chart about which areas of Atlanta have the most affordable median home prices and tried to make a decision from there. I Googled endlessly: “Apartments in [insert chosen city here].” The problem was, I was very picky, and my apartment had to be safe, affordable, and as a twenty-something, I wanted to be around other young people. I didn’t know many people here, so I had no one to live with and one-bedrooms that met my requirements were slim pickings.

So I called KNOWAtlanta Real Estate.

A kind man named Brad spoke with me and asked for my ideal location and price and told me he didn’t want me to live in a bad part of town. He worked around my schedule and sacrificed time he could spend with his family and talked to me on the phone at night and in the mornings. He took note of my email and sent me over a dozen apartments by MAA Communities, each with a gated entrance, nice amenities, 30 minutes or less from work and less than $1,200 per month.

I settled on a place in Buckhead, which is apparently a really nice area for real estate. It’s about 15 minutes from Midtown and about 30 minutes to Downtown, so it seemed to check all the right boxes he and I had discussed.

When my family came to move me in, we took a trip up to Roswell so my parents could see the big glass building I now work in and so my dad could tell stories of his six-month stay in this area of Atlanta. Roswell is a cute area of Atlanta along the river and has lots of local boutiques, restaurants and what seems to be an abundance of yoga studios.

We drove along Canton Street, the city center of walkable shops, looking for a place to eat lunch. There was a festival taking place and booths with pumpkins were set up everywhere, so parking was more trouble than it was worth and we ended up eating lunch at a place called The Mill Kitchen & Bar, which had a wonderful outdoor patio and breakfast and lunch options for about $10 per entree. My little brother kept saying, “Next time we come visit, we’re going to eat here,” and we kept telling him there were hundreds of other great restaurants to try.

After lunch, we walked across the street to City Square Park, which features historic monuments, water fountains and a beautiful gazebo. The trees here had been “yarn bombed,” an art initiative taking over places like the Atlanta BeltLine where people knit patterns over public property, like a legwarmer for a tree. 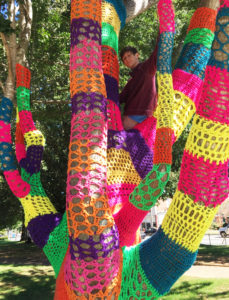 The Brother with the yarn bomb tree.[/caption]

I know quite a bit more about Atlanta now, like I know “ITP” means “inside the perimeter” and “OTP” means “outside the perimeter,” and I know there are a million streets in this city named “Peachtree” (71 streets, to be exact), and the area with the golf carts is in south Atlanta and is called Peachtree City, and apparently the schools are great there. However, I still have a lot to learn and so many new places to eat, so I hope you’ll learn about this great big city with me.