6 Patriotic Things To Do in Atlanta

Looking for ways to celebrate your American pride in Atlanta? Below are the best places to show your love of red, white and blue around the metro area.

Commemorate the fallen Civil War soldiers of south at Stone Mountain Park while admiring the carving in the world’s largest piece of exposed granite of three Confederate figures: Stonewall Jackson, Robert E. Lee, and Jefferson Davis. Visitors can hike the 1 mile trail up the mountain or take a cable car ride to the top and see the large carving up close. Other attractions include the Stone Mountain Museum at Memorial Hall, railroad excursion around the mountain, Skyhike adventure course, 4-D theater, and the world’s largest running laser show with fireworks at 9:30 p.m. Attractions are open from 10:30 a.m. - 8 p.m. each day. 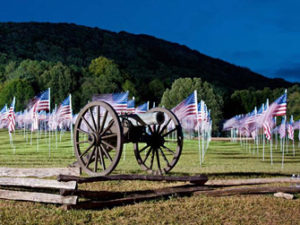 Visit Kennesaw Mountain National Battlefield Park to view the preserved 2,965-acre national battlefield of the Atlanta Campaign during the Civil War. Home to the American Civil War and native Cherokee people, Kennesaw Mountain offers a multitude of historic American qualities. While at the park, pack a picnic to enjoy after hiking some of the many historic trails around the mountain, or experience live firing demonstrations and Civil War civilian life on select dates. 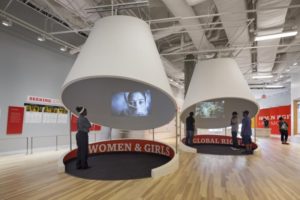 The Center of Civil and Human Rights[/caption]

Center for Civil and Human Rights

Explore this cultural attraction located in downtown Atlanta that relates the American Civil Rights Movement to current Global Human Rights Movements. While learning about the f fundamental rights for all human beings, you will also explore an essential part of American history and culture. Established in 2007, the facility is located downtown next to the Georgia Aquarium and the World of Coca-Cola. General admission is $15 for adults and free for children 3 and under. Discounts available for kids, seniors, students, and active military.

What’s more patriotic than baseball? Chronicling the team’s journey from Boston to Milwaukee to Atlanta, this museum features more than 600 Braves artifacts and photographs. Visitors can also take a one-hour tour of Turner Field starting from the museum and then following a path to a Braves luxury suite, the press box, broadcast booth, locker room and dugout, Scouts Alley, and the museum’s store. The Braves Museum is open year-round, and is located within Turner Field. 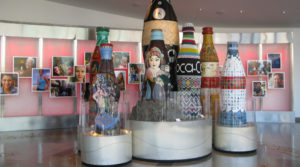 Experience the evolution of America’s favorite soft drink while touring the World of Coca-Cola, a museum dedicated to the Coca-Cola brand. While inside, visitors enjoy a 4-D film inside the Coca-Cola theater, view the history of advertisements and branding, sample over 60 global Coke products, watch the in-house bottling plant in action, and stand in proximity to the Vault of the Secret Formula. Open seven days a week, this museum is located across from Centennial Olympic Park in the heart of downtown Atlanta. Tickets are $16 for adults, $14 for seniors and $12 for children ages 3-12. Children under 3 get in free with adult. 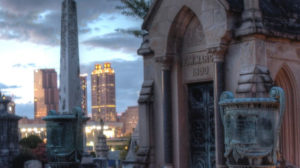 Founded in 1850, the Oakland Cemetery holds many of Atlanta’s diseased settlers, builders, and various noteworthy citizens including Margaret Mitchell and Bobby Jones. Civil War soldiers from both sides who died in the Battle of Atlanta also lie in the garden cemetery. From cemetery hilltops, visitors can also enjoy a breathtaking view of Atlanta’s expansive skyline. Explore the cemetery’s rich history by venturing off on your own, or with the help of a tour guide. Oakland Cemetery is located on Oakland Avenue about a mile from downtown Atlanta.