Home to Hartsfield-Jackson Atlanta International Airport, the Porsche Experience Center and initiatives like Select Fulton, the south side of metro Atlanta is a dynamic community that houses a diverse economy, high quality of life and a unique mixture of neighborhoods.

“The community and economic fabrics of south Fulton offer a diverse network of businesses and communities that are focused on moving the area forward,” says Select Fulton CEO Al Nash. “With new businesses choosing the area, existing businesses expanding operations, easy access to Hartsfield-Jackson, plus the countless cultural and outdoor amenities, south Fulton is the ideal destination for those looking to relocate to our great county.”

Select Fulton was created in early 2016 as a result of a recommendation by the Carl Vinson Institute of Government to the Fulton County Board of Commissioners. Commissioners and the Development Authority of Fulton County board entered into an agreement to establish a stronger economic development initiative by merging the development authority with the county economic development organization. The intent is to provide more effective and efficient services designed to attract, retain and grow businesses throughout all of Fulton.

The Carl Vinson Institute, an organization under the University of Georgia that works closely with state and local governments to help them achieve their missions and improve public service, also recommended Select Fulton realign efforts to complement the economic development work of the 14 municipalities and capitalize on its reach as a county-wide organization. “The result is a strategic focus on redevelopment/revitalization of aging commercial corridors throughout the county, acting as a convener to identify and address opportunities and challenges that will impact a large swath of the county, and provide resources to assist in strengthening assets — workforce, building stock, transportation network, etc.,” Smith says. “Select Fulton is committed to continuing to grow and diversify the economic fabric of the county.”

Smith adds that she doesn’t believe there is another place quite like south Fulton. “The area has a lower cost of living with easy access to Hartsfield-Jackson Atlanta International Airport, major employers and a rich network of communities. Future residents can choose from a diverse housing stock of bungalows in East Point, College Park and Hapeville and estate homes throughout the region, including larger, amenity-rich neighborhoods in the City of South Fulton.

“Residents also enjoy rich cultural attractions: Kenny Leon’s True Colors Theater is in residence at the Southwest Arts Center; the Wolf Creek Amphitheater attracts summer festivals each year; and the Tom Lowe Skeet Shooting Range garners interests from across the world. All of these assets and more are nestled throughout the communities of south Fulton County.”

In addition to thriving neighborhoods, south Fulton is home to major employers like Chick-fil-A, Delta Air Lines, Atlanta Metro Studios and numerous small to medium-sized businesses. “These companies are the fabric of the local economy and great stewards of the area,” Smith says. “Residents with a variety of skill sets — creative design, film, accounting, logistics, health care, retail, etc. — can easily find employment within the region.”

The cities south of Downtown Atlanta are committed to offering a high quality of life and unique amenities to attract residents.

“The cities are dedicating resources to create and maintain major employment and retail centers; foster development of emerging industries, such as the film and digital entertainment and bio-tech; ensure that communities are safe; and address needs for future growth,” Smith says. “New multi-family housing developments, some near public transportation, such as MARTA, are being developed in downtown College Park, East Point and Fairburn. With the recent voter-approved TSPLOST, more than $570 million will be invested in roads throughout the county to maintain and improve safety conditions and operations, create congestion relief, provide funds to quickly respond to problems and add pedestrian, bike and streetscape improvements.”

Regional initiatives that leverage the power and strength of the cities in south Fulton County, the City of Atlanta and neighboring counties are gaining momentum, adds Smith. “The Aerotropolis Alliance is working diligently to position the airport area as a thriving metropolis housing Class A office space, internationally recognized hotels, a diverse industry mix and amenities that further establish Fulton County as a global destination.”

Accomplishments by the organization so far include 24-hour private security coverage in the Hartsfield-Jackson area and interchange landscape cleanups, just to name a few; and planned improvements in the area will include a Diverging Diamond Interchange on Camp Creek Parkway near Interstate 285, streetscape and pedestrian improvements, improved commercial vehicle access and much more.

The South Fulton Parkway Alliance has also convened residents, the business community and local governments to consider strategic development of the corridor from the east gateway of Hartsfield-Jackson to the west bookend of Fox Hall in Douglas County.

Select Fulton is strategically focused on redeveloping aging commercial corridors throughout south Fulton, including Fulton Industrial Boulevard, Old National Highway and Roosevelt Highway. “South Fulton County is ripe for development with thousands of acres of undeveloped land, cities that are focused on being the destination for new companies and residents alike, and a well-educated population,” says Smith.

In addition, UPS recently announced the opening of its Southeastern region distribution facility on Fulton Industrial in late 2018; Atlanta Metro Studios has built the largest soundstage in the country; Google recently located a facility in Fairburn; and the major commercial and industrial corridors, such as Interstate 85 and Fulton Industrial Boulevard, are experiencing a resurgence of interest from developers and companies seeking to locate near the top brands like Amazon, Kraft and Clorox.

There are approximately 25 cities and many more neighborhoods that make up southern metro Atlanta in Douglas, south Fulton, Fayette, Henry and Clayton counties. Together, city leaders, builders and developers, residents and club owners, such as in golf and tennis communities, are committed to growth and supporting metro Atlanta’s economy. Learn more about just a handful of these below: 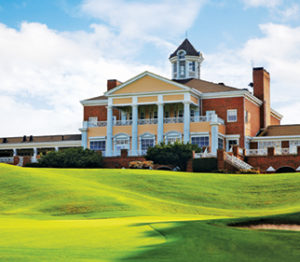 “Immerse yourself in the private club lifestyle at Eagle’s Landing with a welcoming and friendly membership,” she adds. “The club provides an array of amenities to suit all your business, social and family needs. The newly renovated clubhouse includes men’s and women’s locker rooms, pro shops for both tennis and golf, a fitness facility and casual dining in our Members Lounge and ChopHouse 88. From the championship golf and practice facilities to tennis and swimming, we have all you need for fitness and fun, plus programs, lessons and leagues, including junior golf and tennis academies.”

Additional amenities at the club that are sure to attract relocators include a 27-hole course, eight lighted tennis courts, including six clay and two hard courts for U.S. Tennis Association and Atlanta Lawn Tennis Association (ALTA) league play, 50 percent off dining to treat friends and family when they visit and benefits through the club’s ClubCorp ONE Membership and swim and fitness available at the adult and family pools and fitness center.

Fayetteville
Just over 16,000 people live in Fayette County’s city of Fayetteville, which was founded in 1823 and named after Marquis De Lafayette of France who aided President George Washington during the Revolutionary War. Originally a primary railroad stop between Atlanta and Fort Valley, Fayetteville’s modern-day growth is fueled by its close proximity to Hartsfield-Jackson.

“If you‘re working in the airline industry or even Downtown Atlanta, Fayetteville is the place to locate due to its relatively short commute, excellent schools, health care and quality lifestyle,” says Brian Wismer, economic development director for the City of Fayetteville.

He adds there are two factors attracting people to the city: the city’s determined efforts to revitalize the downtown core by actively recruiting new restaurants and retailers, along with new pedestrian sidewalk enhancements, making downtown Fayetteville an exciting place to hang out and enjoy; and the location of Pinewood Studios’ North American headquarters within the city limits has created a new excitement and interest in the city. Some of the biggest films shot outside of Hollywood are being made on their Fayetteville campus.

Growth continues in Fayetteville. Wismer says the Georgia Film Academy, which is preparing youth for careers in the TV and film industry just across from Pinewood Studios, continues to expand its physical footprint. A major expansion of the downtown district is in early planning stages and will soon bring new dining, shopping and living opportunities unlike anything found on the south side. And for those that enjoy the tranquility of nature, Fayetteville recently opened The Ridge Nature Area, featuring more than 300 acres of beautiful woodland trails A kayak and canoe trail will be coming this year. 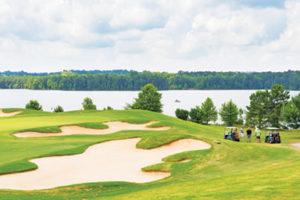 A diverse selection of home styles, lot sizes and price ranges help meet the needs of homeowners at any life stage. In 2016, the community sold 81 homes and closed on 51, with 25 still available. A number of builders are constructing homes in Heron Bay, including D.R. Horton, which is building The Villas, The Enclave and The Links; Century Communities, which is building The Preserve; and Heron Bay’s custom builder Lifebuilt Homes.

Amenities on the property are sure to please anyone looking to relocate to the area. These include an aquatic center with ample room to relax by the pool or play with children, a ClubCorp golf course that offers 18 holes and more than 4 miles of winding trails that invite residents to tour the property. Upon completion of the community, there will be about 10 miles and 1,000 acres of natural woodlands, lighted tennis courts for residents and ALTA members and Lakefront Park, which is surrounded by the 1,000-acre Cole Reservoir with spacious areas for residents to enjoy fire pits and amphitheater-style terraced grounds. 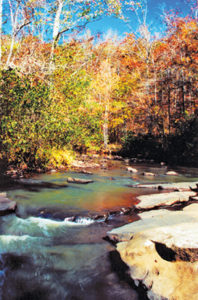 “Peachtree City is probably most famous for our golf cart lifestyle, with more than 10,000 golf carts and 100 miles of multi-use paths linking neighborhoods to shopping areas, schools and parks,” Tyler says. “But the community is also a full city, with its own industrial park and more than 170 established neighborhoods with home options to appeal to all age groups.”

Tyler says many residents commute to Atlanta and Hartsfield-Jackson for work, but they enjoy the more laid-back lifestyle Peachtree City offers on evenings and weekends. “The community retains a natural beauty due to the preservation of trees throughout and abundant greenspace and recreation areas. We also are blessed with outstanding schools and a low crime rate that people relocate to metro Atlanta find very appealing.”

“As our city manager likes to say, ‘a rising tide lifts all boats.’ Southside communities continuing to grow and prosper help support each other,” concludes Tyler.