The Atlanta Braves opened their inaugural season at SunTrust Park on April 14, and while Opening Weekend tickets were hard to come by, you should make sure to attend a few Braves games this baseball season. Here are 10 reasons why the new ballpark will provide you and your family an unforgettable experience.

Click through the gallery or read below to learn more. 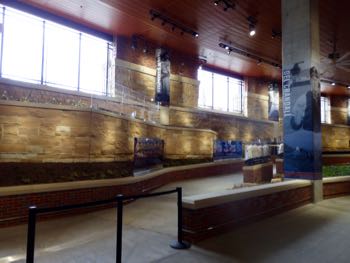 On the lower level at SunTrust Park, you will find the Monument Garden, which features at its center a new Hank Aaron statue designed by Atlanta-based artist Ross Rossin. You'll also find multiple interactive exhibits and memorabilia stations dedicated to Braves hall-of-famers and memorable moments from the team's history. 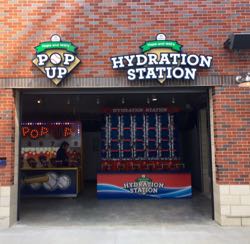 Hope & Will’s Sandlot
The Braves have a long history of partnering with Children's Healthcare of Atlanta to provide unique activities for kids. Thus, SunTrust Park provides the opportunity to create new experiences. This area is a kids' interactive zone with games; attractions, such as a zipline course and rock climbing wall; and photo opportunities. This playground within the ballpark's gates is a first of its kind for a Major League team and is sure to get your young ones excited about coming to the games. 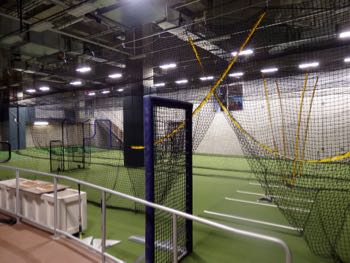 Indoor Batting Cages
For those baseball fanatics who like to get to the games early and watch their favorite players take batting practice, there's a new experience at SunTrust Park. The new facility features batting cages for the players beneath the stands behind the dugouts. Keen observers will note that a few well-placed windows not only provide natural light but a space to watch their favorite hitters warm up. 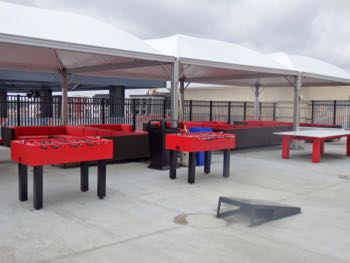 Xfinity Rooftop
The Xfinity Rooftop at SunTrust Park provides fans with an eye-in-the-sky view of the games. This area is open to all game ticket holders and features both open and enclosed lounge areas, a bird’s eye view of the field, and a covered gaming area where fans can gather for friendly competitions of their own. 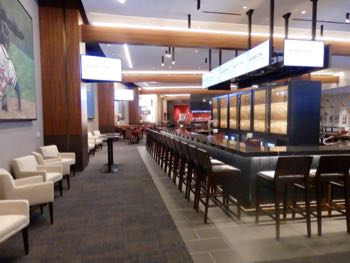 Delta SKY360° Club
Another unique experience available to Braves fans is the Delta SKY360° Club. This members-only area sits behind home plate and not only provides a cool, cozy atmosphere to get out of the sun; it features a Gold Glove Awards wall with trophies from some of the best players to ever wear a Braves uniform. Catch it if you can. 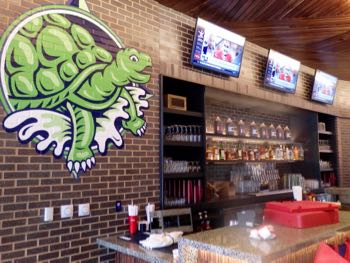 Terrapin Taproom
Athens, Ga.-based Terrapin Beer Company has teamed up with Fox Bros. Bar-B-Q to open the Terrapin Taproom at SunTrust Park. This microbrewery and restaurant will feature a rotating menu of craft beer and menu items. Located outside the right field gate entrance, the Taproom will stay open year-round, so even when the Braves are away, you can stop in for some killer 'cue and a refreshing brew. 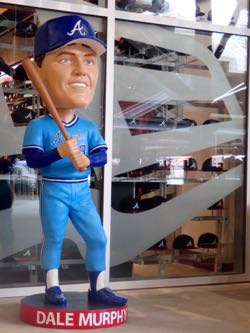 Braves Clubhouse Store
Also open year-round, the new Braves Clubhouse Store at SunTrust Park will feature all the gameday gear you and your family needs – from hats and jerseys to collectibles and memorabilia. And of course, bobbleheads. You can't take home the larger-than-life bobblehead statues such as the Dale Murphy statue pictured, but you likely can find a much more practical size to take with you.

Fan plaza and The Battery Atlanta 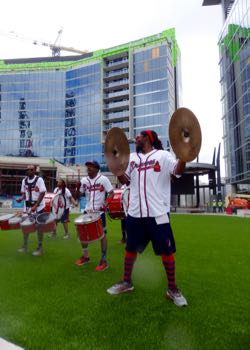 What modern-day ballpark would be complete with a fan plaza? But SunTrust Park takes it to a new level. The large fan plaza and the 400,000 square feet of office and retail space within the adjacent Battery Atlanta provides sports fans in Atlanta with gameday (and year-round) opportunities they've never experienced. For example, the Coca-Cola Roxy is back to host concerts and other live events, several internationally renowned chefs are opening restaurants, and out-of-towners soon will be able to book a luxury stay at The Omni Hotel. 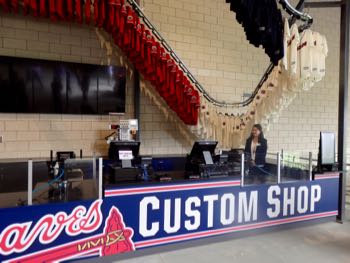 Braves Custom Shop
Sure, many of you have purchased personalized Braves jerseys. But have you ever been able to do it on-demand? Be sure to stop by the Braves Custom Shop to watch the magic happen. Actually, it's just needle and thread, but it feels like magic. 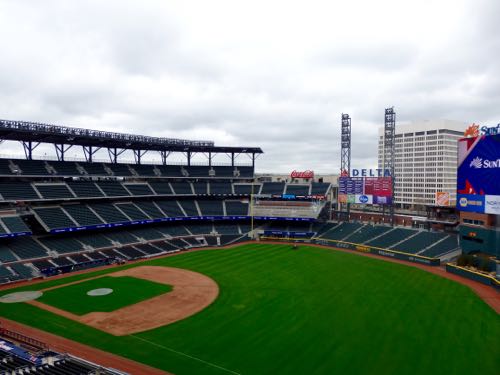 SunTrust Park
According to the Braves, SunTrust Park is the perfect marriage of classic ballpark feel, modern amenities and Southern hospitality, creating a fan experience unlike any other. In addition to all of the great baseball you can expect to see this season at SunTrust Park, the facility itself is simply fantastic to look at. This is a new breed of ballpark, as the designers put it, and will usher in a new era of sports entertainment – not just for Atlanta but for major cities around the country. 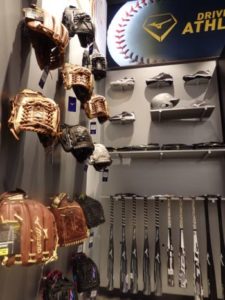 The Mizuno Experience Center is much more than a store selling baseball bats and gloves. It is an interactive environment that immerses athletes and fans in the history, innovation, and craftsmanship that has inspired Mizuno gear for more than 110 years. A first-of-its-kind facility, the Center showcases the breadth of Mizuno baseball, softball, golf, volleyball, and running gear — including many custom-made options. And young Braves fans who may not have a baseball glove, but would relish the chance to catch a fly ball or home run ball, can rent gloves from Mizuno during the games.

Get in the KNOW with Atlanta sports- Learn all about Atlanta Falcons, Atlanta United FC, Atlanta Hawks, ALTA and more. read more

The area boasts an array of outdoor adventures that are perfect for people of all ages. From drifting down the river on a lazy afternoon to cycling along countless beautiful trails to taking in nine innings of America’s pastime, there’s really something for everyone. read more