It covers 1.2 square miles. That’s a mere 120 blocks, or .8 percent of the land area in all of metro Atlanta. Yet, it is home to more than 65,000 jobs, with the addition of 16,000 new jobs being announced since early 2015. More than 20 major construction projects currently are underway, bringing new high-rise buildings and vital renovations to the area, and another 20 significant projects are in the pipeline. Three Fortune 1000 companies have chosen it for their corporate headquarters, and eight of the city’s largest law firms can be found within its boundaries, as can 28 percent of the city’s tech jobs. Residential development is booming, and locals and visitors alike can access 25 different arts and cultural centers, 3,000 annual cultural events and more than 150 renowned restaurants. It’s a bustling district that has clearly hit its stride, growing by leaps and bounds and flourishing in ways that are tangible and exciting. But there’s more than meets the eye when it comes to Midtown’s seemingly recent explosion of activity.

Looking to make a move to Midtown? Click here to learn more about the hottest residential communities >> 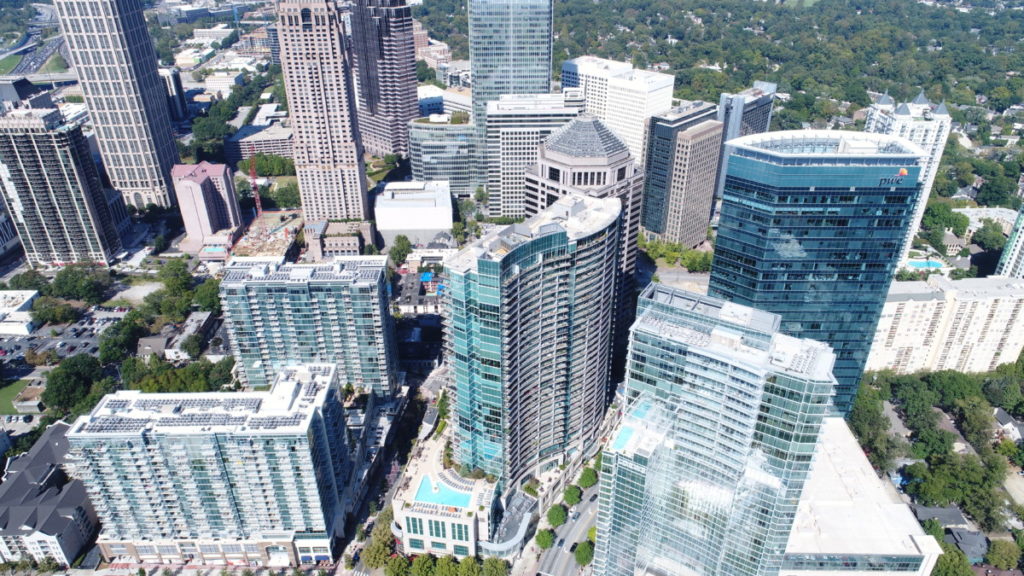 “Midtown is a success story that’s 40 years in the making,” says Brian Carr, director of marketing and communications for the Midtown Alliance. “Midtown had once been vital to intown living. But urban decay took a toll on the area. There were crumbling sidewalks and a lack of development, and it became a depressed area. People didn’t want to be here anymore.”

In fact, according to Mark Toro, managing partner of North American Properties, there was a great deal of disinvestment in Midtown throughout the 1960s and into the 1970s. Then, in 1978, a small coalition of business owners decided to find a way to change that, and the Midtown Alliance was born. “They wanted to clean up the neighborhood, attract more quality development, reduce crime and make Midtown visually attractive so that people would want to spend more time here,” Carr explains.

That effort took a huge step forward in 1997 with the development of Blueprint Midtown, a visionary master plan that would help turn Midtown—that distinct district located south of Buckhead and north of Downtown Atlanta—into a locale that would provide big city living with a neighborhood feel. And it’s that plan that has become the foundation for the action being seen in Midtown today.

“There is a national trend towards a preference for an urban lifestyle. And it’s not just the next generation of Americans who want this—it’s also the last generation. Right now, baby boomers and echo boomers (also known as millennials) want the same thing at the same time: energy, mobility and the diversity of experience that can only be found in cities,” notes Toro, who also is the incoming chair of the Midtown Alliance. “We see it all over Europe and around the world. The urban lifestyle is a desirable one that’s fully amenitized, exciting, fun, active and energetic. And that had not been known in Atlanta before now.”

Essentially, the main objective is to transform Midtown into the ultimate live-work-play community—one in which people can reside close to their jobs and have access to a wide array of cultural and entertainment options both during the day and after hours. It’s a 24-hour-a-day, seven-day-a-week perspective. “Its about energy. Human energy,” Toro continues. “People are craving this kind of urban lifestyle and experience. We have found ourselves more connected than we’ve ever been because of devices, yet we’re actually very isolated. We want the ability to commune.”

“People feel a strong sense of community here, and we want to add to that vibrancy,” Carr adds. “We want to change the way that people experience Midtown.”

From the way it looks to the way it feels to the way it operates, everything about Midtown is changing. And that’s exactly what the Midtown Alliance wants to accomplish through Blueprint Midtown. In recent years, many of the organization’s original objectives have been implemented, and modifications have now been made to what has become a “living document” that is designed to guide Midtown’s continuous growth. The results to this point have been remarkable, and there’s even more on the horizon. 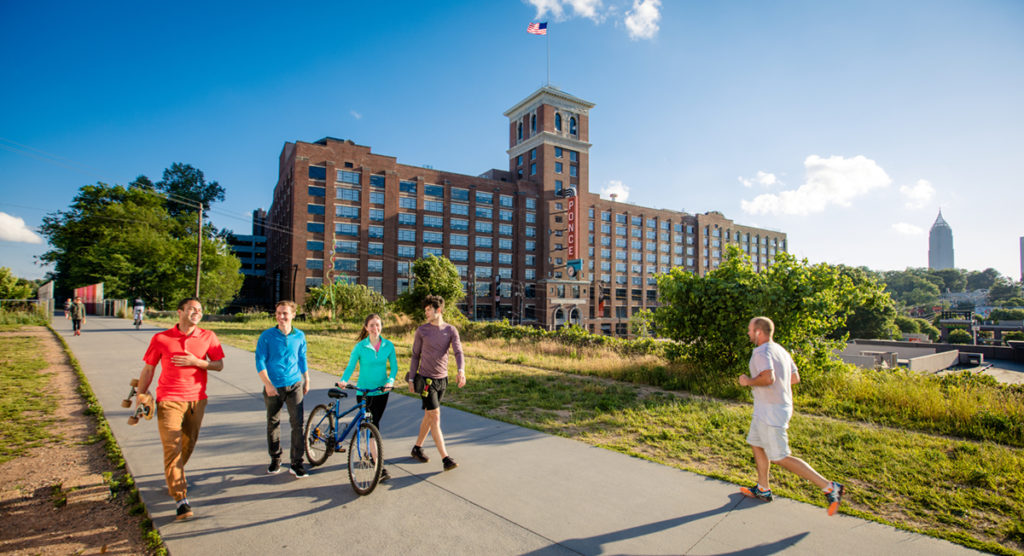 It’s impossible to drive through—or even adjacent to—Midtown without seeing towering cranes and construction activity around nearly every corner. Both new construction and renovation projects abound in the area. And those projects account for more than 20 million square feet of office space, an abundance of retail development and extensive residential development, with thousands of new apartments, condominiums, lofts, homes and more. “Up through the ‘90s, the development in the area was largely built around commercial enterprise, but now it is also geared towards real estate development,” Carr says. “It’s about offering residential living in an urban environment.”

“When Blueprint Midtown was created, 66 percent of the land in Midtown was undeveloped or underdeveloped. Now that number is 25 percent. So we’ve made a big dent in what was there,” Toro reveals. “There is a tremendous amount of momentum, and we expect that to continue.”

One of the most coveted projects is the renovation of the area’s first mixed-use development, Colony Square. Built in the 1970s, it was considered to be 30 years ahead of its time with an open-air mall, apartments, office space and dining options under one roof. Over the years, that perception changed drastically. “Midtown caught up to and surpassed Colony Square,” Toro says. And that’s why his company, North American Properties, purchased the iconic locale in 2015 and has undertaken a complete rehabilitation of the property, which sits at the corner of Peachtree and 14th streets—what Toro refers to as “the corner of Main and Main.” Touting the highest density of any location in Midtown, the confluence of Peachtree and 14th is truly the crossroads of the district. And it’s here that all the visions for the community will converge, as Colony Square undoubtedly will be the center of social activity.

“We are reimagining Colony Square to serve the urban community that has grown up around it. We have 10,000 new residents that are seeking a fully amenitized community with a dearth of retail and dining opportunities, and the community has been lacking that,” Toro observes. “We’re going to provide Midtown with a living room. A place that you can call home. Where you can work, hang out, shop, dine and be entertained. It’s going to be a key differentiator for Midtown.”

“Now that the skyline has taken shape, we’re moving on to the street level. We want quality design in the buildings that are being built, but we also want to look at how those buildings interact with people at the street level,” Carr states. “The ground is literally changing under our feet every month, and we need to define that space where the buildings and the streets meet within the 120 blocks that make up Midtown.” 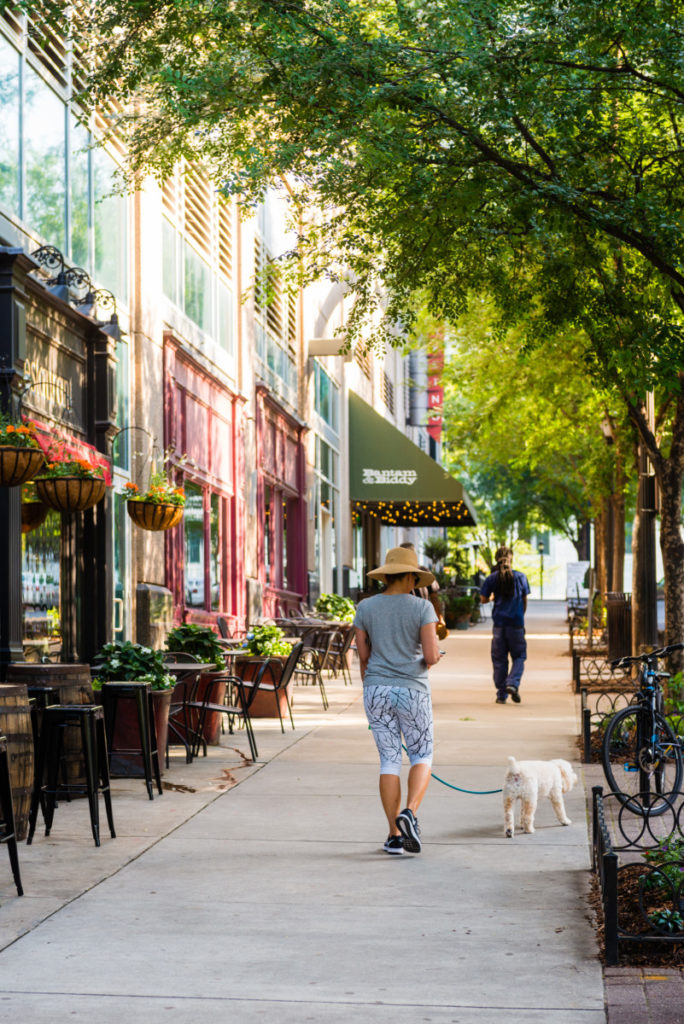 The key to making Midtown’s street level work is the ability of pedestrians to move through it easily. “One of the marks of a great city is walkability,” Toro says. From right-of-way changes to investment in traffic signals, the Midtown Alliance is working with the City of Atlanta to make the process of getting around the area on foot seamless.

Of equal importance is the ability of Midtown’s pedestrians to access the city’s transit system. “Midtown has a complete network of transportation options. We have a very strong transit system, and it’s only going to get better as Midtown grows,” Carr notes. In fact, 96 percent of the buildings within Midtown are a six-minute walk from one of the community’s four bustling transit stations. For a city that has been synonymous with sprawl, the focus on providing the best possible transit options is vital to bringing people into the district and encouraging them to stay. It also helps that a new bike share program and bike lanes have been added to the growing list of available modes of transportation. “In Midtown, you can be a motorist, pedestrian, bike rider and transit rider all in one day,” Carr continues.

Midtown also now boasts access to the Atlanta BeltLine, a major redevelopment project throughout the entire City of Atlanta that ultimately will provide a network of public parks, multi-use trails, jobs and transit along a former 22-mile railroad corridor circling downtown and connecting many neighborhoods along way. Forming the eastern border of Midtown, the BeltLine plays an important part of Midtown’s revitalization.

According to Brian McGowan, president and CEO of Atlanta BeltLine, Inc., “The Atlanta BeltLine serves to connect Midtown to other intown neighborhoods that were historically disconnected by rails or roads. People want safe ways to get to groceries, restaurants, shopping, green space, and friends and family, and the Eastside Trail provides that today. The BeltLine offers an additional transportation option for pedestrians and cyclists that is safe and out of traffic. It connects to Grady High School (a benefit to Atlanta Public Schools) and Piedmont Park (a benefit to visitors and residents of Midtown). And when it is fully completed, the Atlanta BeltLine will provide light rail transit and multi-use path connectivity from Midtown to destinations throughout intown Atlanta.”

Of course, Atlanta is known as the City of Trees, and people who make their way to Midtown also want to experience that unique facet of the area. “People want the downtown experience with the big buildings. But they also want the feel of Buckhead, with its nice tree canopy,” Carr says. “Our goal is to blend those two together in a compelling way.” Fortunately, Midtown is home to Piedmont Park, one of the most well-known and beloved green spaces in the city. What’s more, tree-lined plazas are being added to the designs of many buildings and public areas, offering an array of outdoor meeting spaces for daytime employees, local residents and visiting tourists to walk to and enjoy year-round.

The BeltLine offers an additional transportation option for pedestrians and cyclists that is safe and out of traffic... And when it is fully completed, the Atlanta BeltLine will provide light rail transit and multi-use path connectivity from Midtown to destinations throughout intown Atlanta.” - Brian McGowan, president and CEO of Atlanta BeltLine, Inc.

The accomplishments in Midtown have not gone unnoticed. Employers of all sizes—from small startups to established Fortune 500 companies—have chosen to call Midtown home. Entire industries are becoming synonymous with the community, including technology, healthcare, FinTech, among others. And they have access to an impressive talent pool that is being drawn to the district not only because of distinguished schools like the Georgia Institute of Technology and Emory University, but also thanks to the many amenities that have become hallmarks of this evolving community.

“Midtown has grown up and realized the vision that was created 40 years ago,” Toro says. “And that allows us to compete on a global scale. Before, there was no urban core of substance. But now we have that to offer.”

“These are exciting times,” Carr concludes. “This is the gateway to the region, and we want to make sure that people have a great experience. We are raising the prominence of Midtown.” 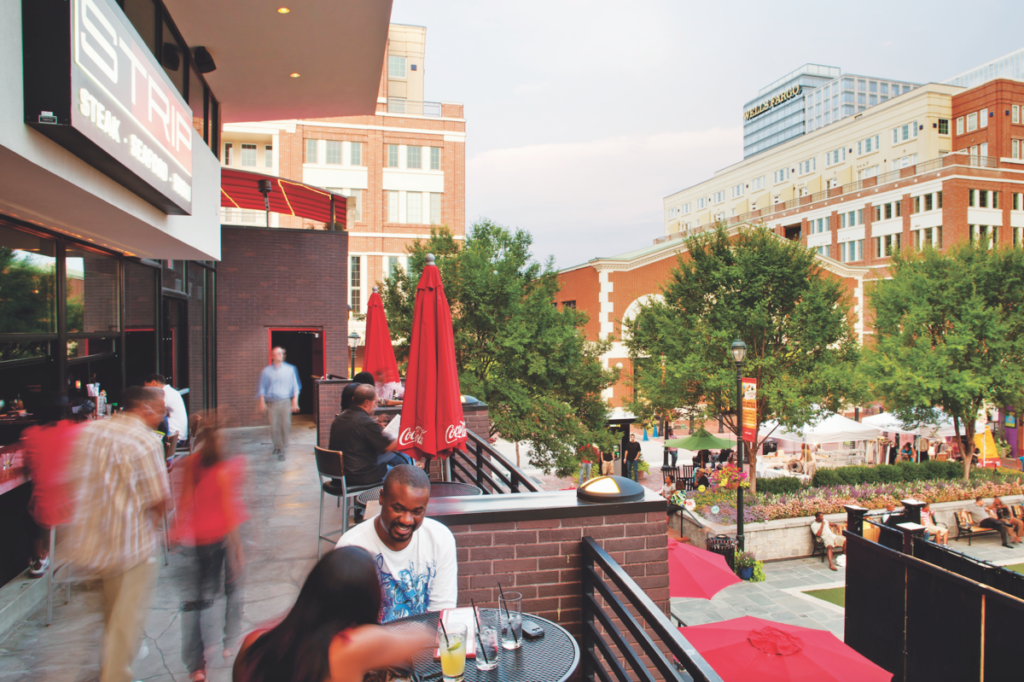 While the core of Midtown covers 1.2 square miles, there are additional areas that are part of the larger community and worth visiting.

Public art is an important part of the cultural identity of Midtown. In addition to myriad cultural venues (from the Fox Theatre, the Alliance Theatre and the Atlanta Symphony Orchestra to the High Museum of Art), a diverse collection of art can be found throughout the district. In fact, there are more than 30 public art installations within the 1.2 square miles that comprise Midtown. 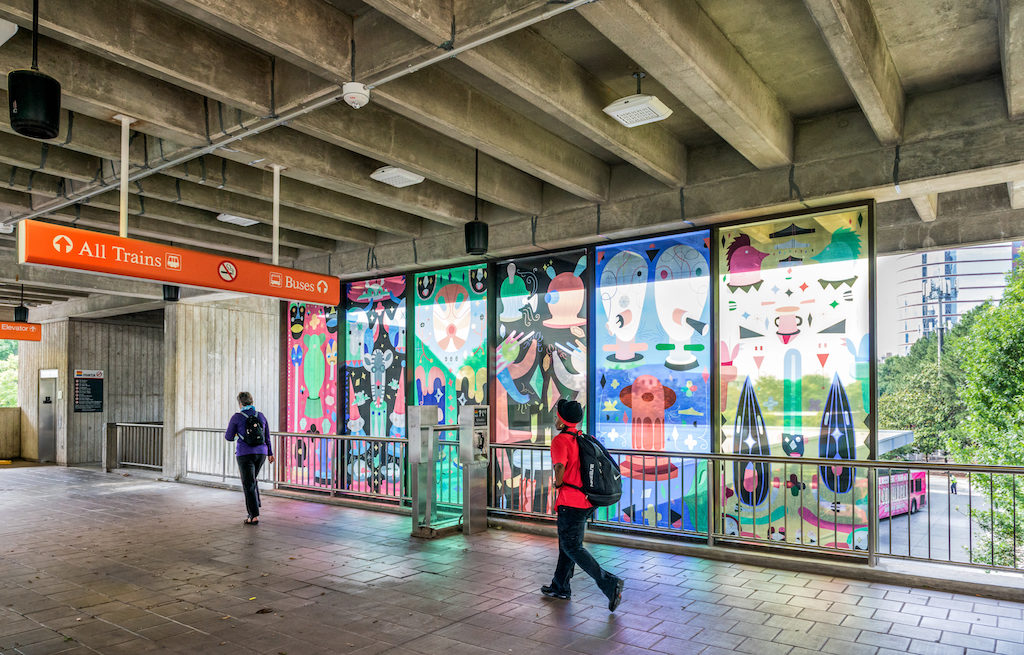