Contemplating a move to Atlanta? The key to finding your neighborhood nirvana is in knowing where to look. And a great place for young up-and-comers to start is Intown, where a number of charming, vibrant communities, typically located on the east side of Atlanta, offer a multitude of housing types and styles in a wide range of prices, from very affordable to outright over-the-top. In addition, Intown is jam-packed with a diverse range of things to do and places to see, all within easy reach of downtown Atlanta. Narrow your choices with this guide to the best communities that Intown has to offer.

Atlanta’s Old Fourth Ward (or O4W as locals call it) is one of the oldest sections of Atlanta. In the late 1800s, it was home not only to some of the most posh residences in the city, but also to an industrial area that was peppered with apartment buildings and railroad yards. In the last two decades, O4W experienced a surge in redevelopment projects aimed at attracting residents seeking an active and artsy lifestyle in preserved historic buildings. For instance, the enormous Sears, Roebuck & Co. building, built in the 1920s, was recently renovated into the highly popular Ponce City Market, a destination for hipsters desiring amenities like trendy bars, restaurants, shops and entertainment venues. The BeltLine runs along O4W’s eastern border, reclaiming mostly abandoned land and transforming it into mixed-use paths for pedestrians and bikers alike.

Housing in Old Fourth Ward is much sought after by millennials with kids (and, in many cases, their much-loved dogs). Fixer-uppers are plentiful here; or, for those wary of construction projects and who have a bigger budget, the area offers many previously restored historic homes. The architecture here is diverse—1920s bungalows and Craftsman-style homes can be found nestled amongst modern apartment buildings and hip, industrial-style lofts. 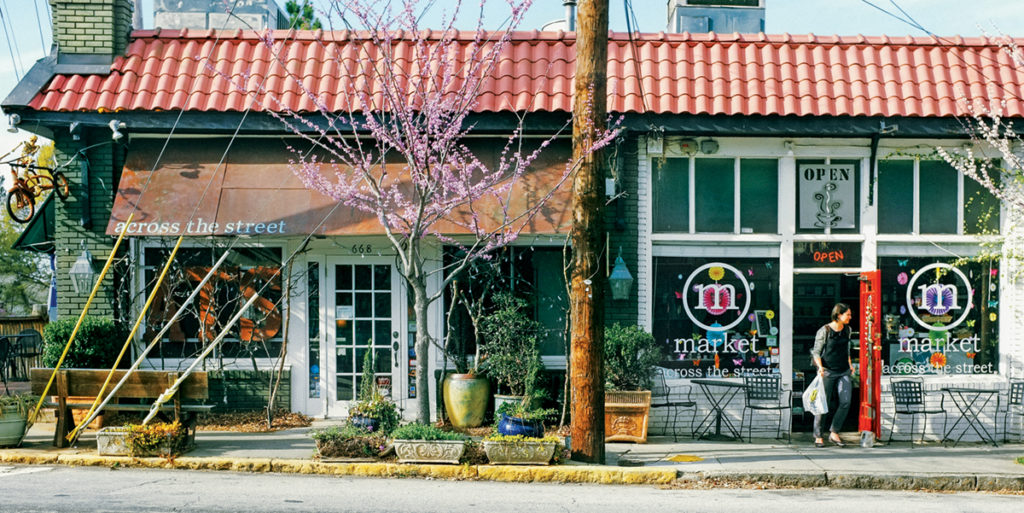 Just south of Old Fourth Ward is Cabbagetown, originally built around a textile-processing mill in the late 1880s. At that time, the area was populated with millworkers and their families, mainly of Scots-Irish descent (it’s said that they cooked with cabbage constantly and the place always smelled of the vegetable—hence the name). The town fell into disrepair with the closure of the mill in 1977, but now, thanks to redevelopment efforts, the streets are lined with hip eateries, boutiques and art galleries. The area attracts a wide variety of residents, from empty-nesters to young families, and is popular with artists, musicians and their patrons.

Today, the textile-mill building that started it all has been given new life as the Fulton Cotton Mill Lofts, the nation’s largest residential loft community. In addition, Cabbagetown is known for more budget-friendly housing than neighborhoods closer to Atlanta’s city center, with charming renovated 1800s-era mill cottages and modern new-construction condos or apartment buildings.

Tags and graffiti are a big part of Cabbagetown culture—they even have festivals celebrating the bold, colorful art form. The neighborhood boasts a fascinating mix of historical landmarks, charming architecture and in-your-face street art. Not-to-be-missed Cabbagetown icons include the Krog Street Tunnel, plastered with murals by local artists, or the scenic six-acre Oakland Cemetery, the final resting place of Gone With the Wind author Margaret Mitchell.

Kirkwood—a community five miles to the east of Atlanta’s downtown area and accessed by streetcar lines back in the day—was established in the 1870s. It’s been designated Georgia’s largest national historic district and is famous for its many beautifully preserved Victorian-style homes. But Kirkwood is also recognized for its numerous Craftsman-style bungalows, unique designs by a local architect who built many of them at the turn of the century. These homes and Kirkwood’s quaint downtown contribute to its small-town feel, even within such a short commute to the big city.

Kirkwood’s residents take great pride in their neighborhood and celebrate it often with festivals like the Kirkwood Spring Fling and Tour of Homes, the summertime Wine Stroll and winter-season Kirkwood Home for the Holidays. While new-home construction in Kirkwood provides an affordable inventory of contemporary homes, the local residential associations keep a close eye on development, desiring to maintain a quaint, historic feel to the neighborhood. 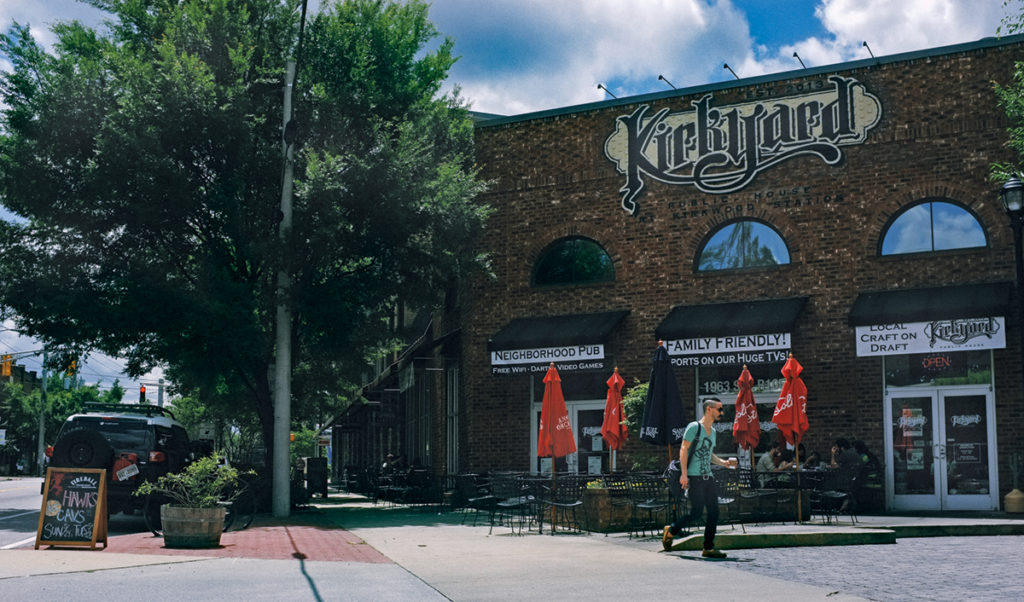 This east Atlanta neighborhood is named for the intersection of its main arteries, Virginia and Highland Avenues, both of which are meccas for funky coffee shops, trendy bars and restaurants and quirky art galleries. Like most neighborhoods in the Intown area, Virginia–Highland (nicknamed Va-Hi) faced decline in the early 1960s. But, due to rehabilitation efforts by local residents and investors, it’s now known as one of Atlanta’s most appealing neighborhoods for professionals and young families. The emphasis is on walkability (Atlanta’s popular BeltLine greenspace is close by) and there are many tree-lined streets offering an eclectic mix of sidewalk cafes, upscale restaurants with patios, shops and spas. Cultural offerings include the Jimmy Carter Presidential Library, Emory University and the Callanwolde Fine Arts Center.

Victorian and colonial-style architecture is fairly commonplace here, with historic homes and bungalows built by well-known architects found on many streets. For those with a more modern taste, newer townhouses and condo complexes offer a more budget-friendly housing inventory. The area is eminently attractive to pet owners, with its close proximity to several large parks. Virginia–Highland is recognized and has won numerous awards for its livability.

Just west of Midtown is the bustling commercial area called West Midtown, or The Westside. While the exact borders of West Midtown have not been defined, the area encompasses several neighborhoods and districts in the area (thought to be bordered by Northside Drive, Buckhead, Marietta Boulevard and Hollowell Parkway). The general flavor of the neighborhood, though, is well defined, with a vibrant nightlife, upscale dining and hip music venues. Its well-known arts district hosts its own monthly Westside Arts District Art Walk, popular with many Atlantans. Three local arts centers host gallery exhibits and even live music, including the King Plow Arts Center, which is located in a renovated iron and steel foundry that is more than a century old.

The neighborhood is the site of railway lines General Sherman used to invade Atlanta during the Civil War. As with so many Intown neighborhoods, the area suffered from a decline in the mid-20th century, only to experience a resurgence of development in the 1990s. Once neglected warehouses and factories are now hip, industrial-style lofts and condos, with some buildings dating back to the late 1880s. Housing options in West Midtown include luxe high-rise and mid-rise condos and apartments, favored by young hipsters and empty-nesters alike. And this area’s uber-modern office buildings are quite popular with the high-tech industry. Most West Midtown residents cite convenient access to downtown as a major factor in their choice to live here, but they also acknowledge that West Midtown’s hip vibe has great appeal too. 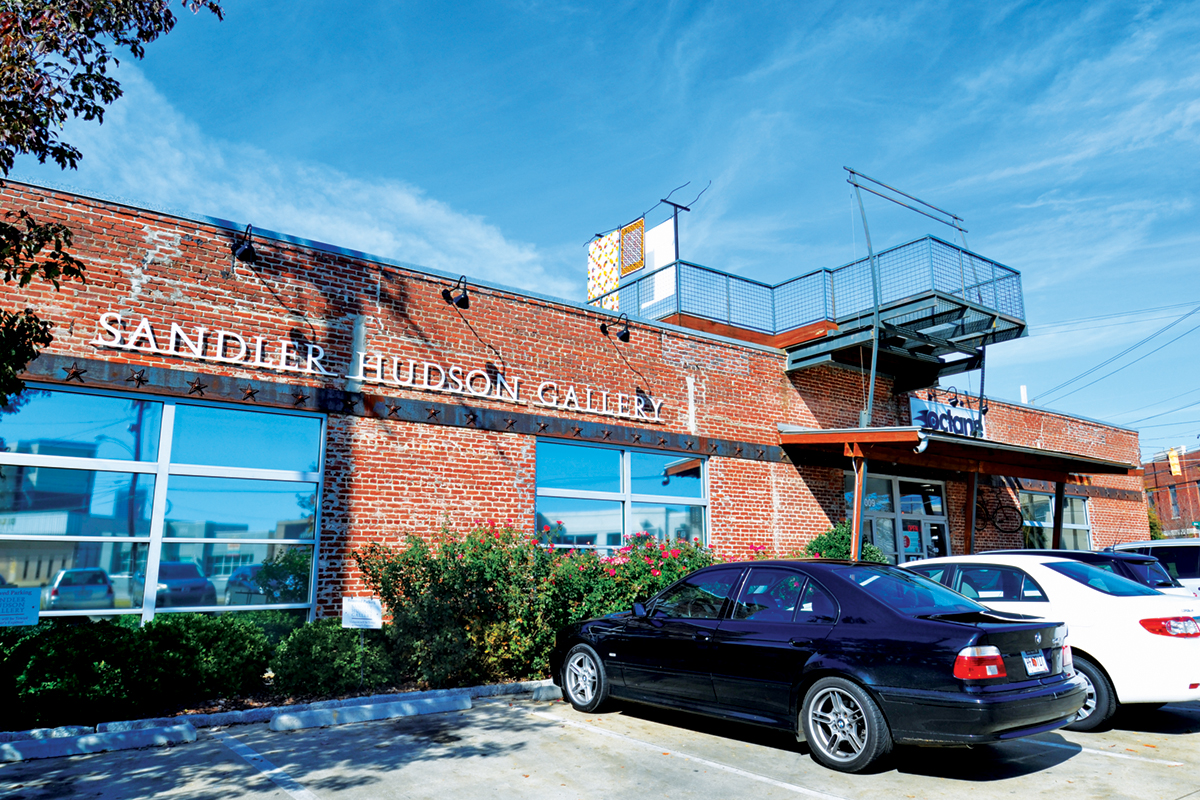 Buckhead owes its name to a 19th-century general store owner who mounted a buck’s head on the wall of his store, a popular outpost for locals and travelers. Luckily, accommodations have come a long way in Atlanta’s trendy Buckhead Village, which is now populated with posh high-rises and upscale single-family neighborhoods. Known as a foodie haven, diners flock to both its fine dining restaurants and casual bistros serving gourmet fare from around the world. Luxury hotels, an abundant nightlife and opulent shopping malls appeal to those seeking high-end entertainment and a vibrant arts scene. But top-quality schools and popular cultural destinations like the Atlanta History Center and Chastain Park Amphitheatre attract young families in search of the good life.

A tour of Buckhead reveals some of the most luxurious housing options available in Atlanta. In some parts of Buckhead, rolling hills, shaded by ancient groves of trees, are dotted with large estates on acres of land. In contrast, the Peachtree Road area is well-known for its modern, glass-encased, high-rise condos built adjacent to historic stone townhomes. The housing market in Buckhead Village is stylish and exclusive, but there are affordable housing options in well-appointed apartment complexes for those with a more modest budget.

We asked Jennifer Kjellgren, broker-owner of Intown Expert, about what makes these Intown neighborhoods the perfect place for millennials in Atlanta. Here’s what she had to say.

“The lifestyle Old Fourth Ward offers has made this one of Intown’s most popular neighborhoods. The BeltLine, Ponce City Market, Old Fourth Ward Park and clusters of shops, restaurants and boutiques make this neighborhood a go-to hotspot offering something for everybody.”

“Cabbagetown is a tiny hip neighborhood in Atlanta’s east side that is filled with history. The Krog Street Tunnel connects Cabbagetown to Inman Park and is a living gallery for ever-changing street art. Its southern border, Memorial Drive, is bustling with development.”

“Kirkwood is a historic Atlanta eastside neighborhood adjacent to Decatur, Eastlake and East Atlanta. It continues to be a popular destination for those seeking an urban lifestyle in a less dense environment with a small commercial business district that continues to thrive.”

“Virginia-Highland was one of the first Intown neighborhoods to become upscale. It’s made up of historic homes, condominiums and apartments and offers a village-like, walkable lifestyle. It’s a great place to be in the middle of the city but be surrounded by parks, historic homes and tree-lined sidewalks.”

West Midtown (or The Westside)

“The Westside is exploding! started as an industrial area known to those in the design industry for years. Today, it is home to many of the city’s trendiest restaurants and shops. There has also been an explosion of development in the area, and what used to be industrial is now residential.”

“Buckhead Village is a small neighborhood in the heart of the Buckhead community that has undergone a transformation and is booming with development. It is adjacent to the exclusive shopping district, Buckhead Atlanta. Here you’ll find some of the city’s most exclusive condominiums, as well as more affordable condos and apartments.”