Lindsay Penticuff in Cities & Neighborhoods , Things To Do
April 14, 2019 3 mins to read

Founded in 1823, even before the City of Atlanta, Decatur is named after U.S. Naval hero Stephen Decatur, and it retains a strong connection to its history while preparing for the future with managed growth and responsible development.

Today, Decatur is known for its festivals, walkability and restaurant scene. Located 6 miles east of Downtown Atlanta, Decatur is only 4 square miles in size. It has a population of 20,000, which makes it one of the most densely populated neighborhoods in the Atlanta area, and it is equal parts urban and small town with tree-lined streets, independent shops and three MARTA stations. The city’s official motto is, “A historic city of homes, schools and places of worship,” which is reflected in the official city logo. 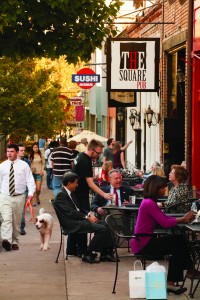 “Decatur is one of the most desirable residential areas in metro Atlanta with home values well above the Metropolitan Statistical Area average, a top-ranked school system, low crime rates and walkable neighborhoods,” says Catherine Lee, Decatur’s downtown development manager. “It is made up of single-family houses and multi-family homes located in the downtown business district.”

Decatur is home to Agnes Scott College and a six-minute drive (or free shuttle ride) from Emory University. It is also the DeKalb County seat, drawing government professionals everyday, and it attracts creative business owners, entrepreneurs and individuals seeking an opportunity to reside and work in the same community.

Decatur has a year-round calendar of events that includes a two-day arts festival, craft beer festival, wine festival, beach party and the nation’s largest independent book festival. The city’s 4 square miles are jam-packed with 200-plus shops, galleries, salons, services, cafes and restaurants making it a regional destination for dining and nightlife. It also has a large collection of public art, eight community gardens and three public dog parks.

“Over the years, the City of Decatur has evolved into a vibrant, small urban city that values its history and enjoys the sophistication and excitement similar to a college town along with all the benefits of living in a major metropolitan area,” Lee says.

Growth on the Horizon

With a daytime population of 30,000 and more than 300,000 residents within a 5-mile radius, Decatur is becoming one of the prime office markets for small to midsize creative firms. Its walkability, density of shops and restaurants, and easy access to Hartsfield-Jackson Atlanta International Airport are also attractive to the growing Millennial workforce. 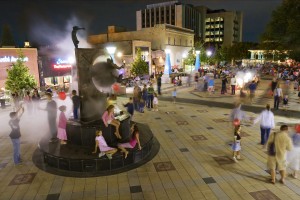 “The population has experienced a steady growth due to Decatur’s high quality of life, strong school system and small-scale annexation,” Lee says. “Decatur’s service-based economy is primarily centered on local professional offices, the DeKalb County court system, legal services, restaurants and shops. Its central location in DeKalb County and proximity to the City of Atlanta and Emory University also make Decatur an attractive location for banking, medical, education services and the headquarters for a number of large nonprofits. The essential nature of these services and the stability of health and education-related businesses provide a solid basis for the City’s economic well-being.”

Lee says Decatur recently welcomed a round of mixed-use luxury apartment complexes to the downtown area. A total of 430 units were built and 730 more are planned for development through 2018. Future development and growth includes The Place on Ponce, a 235-unit luxury apartment building with commercial property on the ground floor that was completed in August of 2015. A restaurant, bakery and boutique fitness studio are slated to open this spring. The Alexan, a five-story apartment complex, is a block from the downtown square and features a social hub equipped with Wi-Fi, communal work spaces, TVs, pingpong, a rooftop deck with views of the Atlanta skyline, a dog spa, electric car charging stations, a fitness center and a salt-water pool. The Arlo, another mixed-use development just south of the square, has similar amenities and is within walking distance of some of Decatur's best dining and retail options.